That afternoon in Maremma I was with my friends Simona and Raffa, and Renzo guiding us, he knew the area very well and he was a great guide.

We left the car at the top of the hill, and carrying the (heavy) equipment backpacks we started walking down to the river to see the light there and to take some photos of two riders. Renzo is a real gentleman and offered himself to take my backpack. The path was narrow and stony. 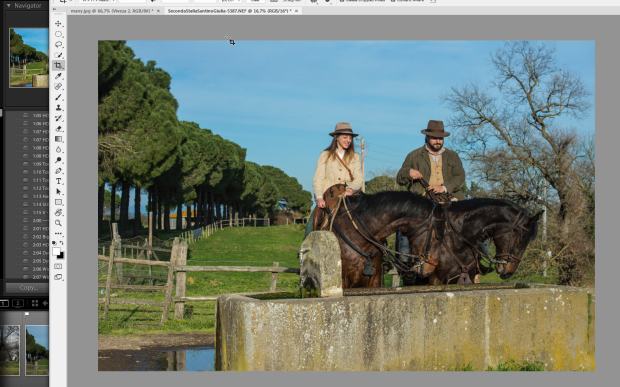 At the fountain. SCreenshot of my monitor.

Well, it was quite a difficult walk, specially returning to the car. On our way back we stopped ten minutes to shoot a few photos of a couple on horse back, before the sun left and the night covered the hills, then we loaded everything and we started driving back “home”.

Suddendly at the very top of the next hill we saw the most beautiful sunset, and two horses by some Roman ruins. It was there for us. The whole thing could’ve happened only once in a lifetime, the film Director up above had set everything so perfectly. 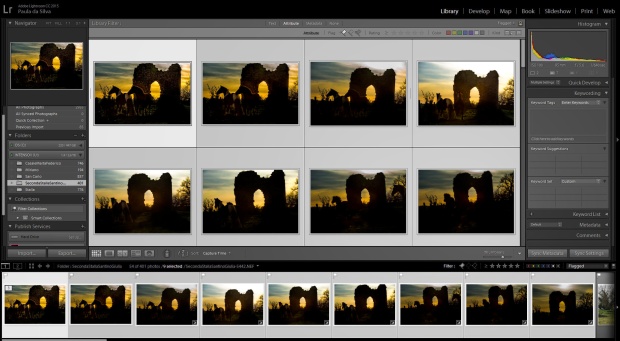 Luck is a very big component of our kind of photography, and we believe it was kind of a reward for the long, tiring walk we had done before. We felt blessed. We went silent the rest of the way to Renzo’s house, as we were moved by such a treat.

screenshot of the FB page a few minutes ago

Maremma, in Italy,  is a country of strong emotions. My scouting trip there was full of great moments, and we were quite a team: my friend Simona, who was born there and knows everyone and everywhere, fellow photographer Luca, who only joined us for the first day, and Raffaella, our problem solver for everything big and small that needed to be fixed somehow.

A fruit pie made by Simona, sitting on the anvil after a photo session, like a sort of treat for the models and us.

We worked a lot, walked a lot, shot a lot and laughed quite a lot. Our days started at 4 a.m and ended at 11 p.m, because I needed to do as much as possible in two and a half days. The weather was great, the light perfect, and the temperature acceptable ( quite cold in the early morning but nice and warm during the day).

We met lots of “butteri”, people who are keeping alive the traditions of cattle work from horseback. We had different people and horses modeling for us every day, I will not mention names because there were many of them and I would forget someone. 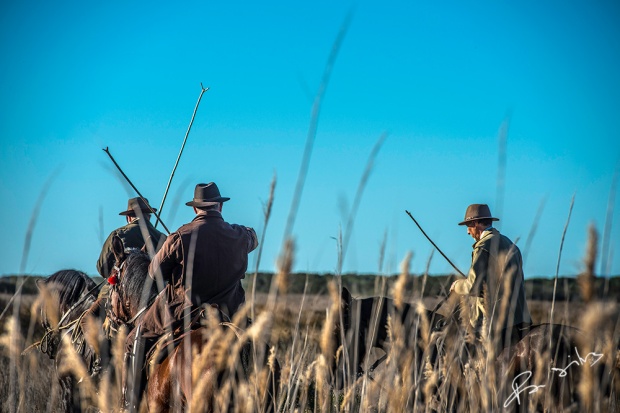 Group of butteri moving from one location to the next

I advise you to check this site, where you can find the whole story about the horses and the men, the land and the traditions. 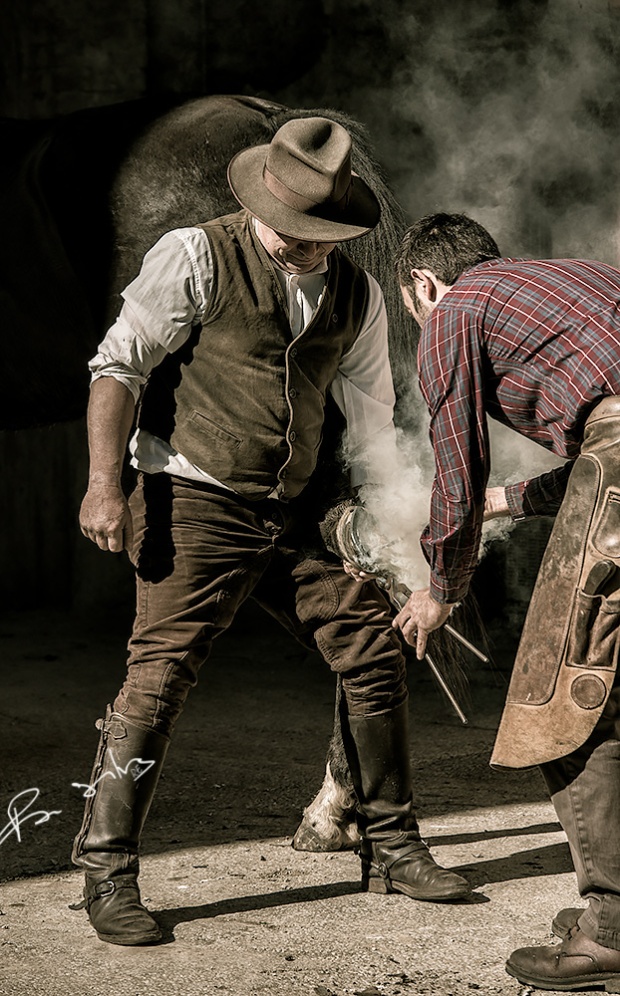 I believe that one of the most disgusting things for me to witness is a guy showing off by abusing or mistreating an animal. Unfortunately that can often be seen in the horse world and I am surely not very popular in some equestrian environments, because I can’t keep quiet and watch a poor horse or any other animal being mistreated.

If you are one of those photographers who think that we are in this world to document and not to judge, believe me, you are ethically an accomplice.

Macho man thinks this is a heroic example of courage

BTW, the above photo was found in the Internet, no idea of who is the author or the rider on it.

Macho man believes that nobody is able to spot his spurs digging on the horse’s side while pretending to hold the horse still by pulling up the horses mouth in a wry smile from eye to eye . The poor horse has no idea of what to do: the spurs ask it to go forward, the rough hands on the reins ask it to stand still or to stop. The horse gets nervous, throws its head up, and the photographer gets a whole series of images of the inside of the horses throat, while terrified equine eyes ask for mercy. MERCY! Macho man has no idea of the meaning of that word.

“I am powerful, I can teach this horse manners, I am macho man the one who can ride this difficult horse” – he thinks

Dear Macho man, you are an idiot. You are not a good rider, in fact you would not be able to ride a REALLY difficult horse. If it was for me you would be sitting on your a… in the ground and not allowed to ride a horse ever again.

Macho men believes that the “rodeo-kind-of-training” of young horses is a sign of courage and good riding. Dear idiot, wake up, a century has gone since REAL MEN were forced to ride REALLY DIFFICULT horses.  Those were men without any education, men who didn’t have any idea of a different way of doing things, men who had to put together the two meals a day,  working in extremely hard working conditions. YOU ARE NOT THAT MAN, dear Macho Man, you are a degenerated fearful idiot, and you ride horses as a hobby, you went to school even if your vocabulary is very restricted and you misspell 1 in every 5 words, and you only dare riding the easiest horses, which you turn into nervous wrecks to be able to show off to other ignorant people. You should know better.

No, you don’t deserve to have any photos of you riding, because other stupid people might emulate you.

You don’t deserve a single LIKE in your Facebook photos, because “liking” your misdemeanors is a sign of lack of love for animals and ethical blindness.

You are not a macho, you are a FAKE MACHO, on a horse. That horse puts up with you because it is a good horse, and it  has a heart. You don’t.